I went to Paris and I’ve been to this city many times, doing the same things such as visiting the Eiffel tower, wandering in Montmartre, retail therapy at Les Champs.

I wanted to do things differently. Search for stories. Going to the places I haven’t been before. Did I succeed? Yes and no.

Instead of going to the museums I had planned I went to St. Honoré, Rivoli and Vêndome. And we all know those streets aren’t that historical. But to make my trip a bit cultural I went to  bars and bistros of my favorite writers and philosophers. Paris was a little bit of Diderot, Rousseau, Sartre but also Saint Laurent and Dior. The perfect balance. Anyway here are my favorite foodspots with a lovely historical touch.

I did a boat trip from the l-Louvre, going to every main attraction in Paris and ended up at the Eiffel tower. Walked from there till Montmartre to go to La maison rose.

“La Maison Rose, opened by Germaine Pichot in 1908, is a Montmartre canteen frequented by several generations of artists, Picasso, Modigliani, later Piaf, Barbara, Aznavour, Nougaro, Brel, or Camus… This emblematic place in Montmartre re-opens its doors at the end of 2017, taken over by a new team, as well as the granddaughter of Béatrice, who had bought La Maison Rose in 1948.”

Loved the idea that lot’s of artists have frequented this place. It’s a cosy restaurant, the menu isn’t that omnifarious. The food changes. The ingredients are very fresh. The atmosphere is great. Very friendly staff.  Loved sitting there on a evening, worrying about nothing. Just enjoying Paris.

As I was staying around the corner, grabbed breakfast at Café de Flore. This place is iconic. You can’t see a movie about Paris without this bar being featured.

It has been frequented by numerous French intellectuals during the post-war years. In his essay “A Tale of Two Cafes” and his book Paris to the Moon, American writer Adam Gopnik mused over the possible explanations of why the Flore had become, by the late 1990s, much more fashionable and popular than Les Deux Magots, despite the fact that the latter café was associated with Jean-Paul Sartre, Simone de Beauvoir, Albert Camus, and other famous thinkers of the 1940s and 1950s.

You have a lovely view over Boulevard St. Germain. Typical Parisian way of serving you. Vite Vite, not the friendliest people. But pretty view as I said iconic place but not mindblowing. I just liked the fact that Sartre met Beauvoir at that particular place. Pretty romantic. I mean breakfast isn’t wauw. Just normal. Eggs, coffee, juice and a baguette….

Let me quote Vanityfair about this place

” Shakespeare and Company, arguably the most famous independent bookstore in the world, occupies a prime piece of real estate facing the Seine in Paris, not far from the Latin Quarter, Place Saint-Michel, and Boulevard Saint-Germain. The river is just a stone’s throw from the front door, and a strong ultimate-Frisbee player could probably nail the south side of Notre Dame—halfway across the Seine on Île de la Cité—from one of the shop’s second-floor windows. The view is that good.”

You can buy a letter without knowing the content. I like surprise and got the cutest poems. 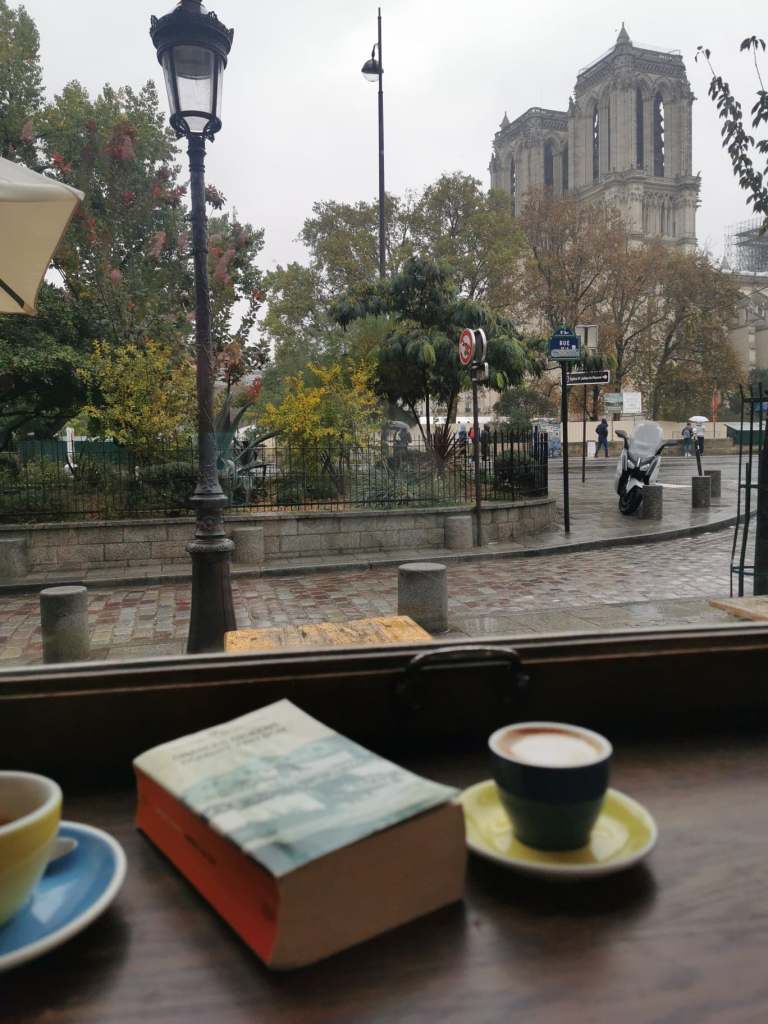 Next to Shakespeare and Company there is a coffeeshop and you can see Notre Dame really well.

The Café Procope, in rue de l’Ancienne Comédie, 6th arrondissement, is called the oldest café of Paris in continuous operation. It was opened in 1686 by the Sicilian chef Procopio Cutò

Some of the famous names you may well recognise that used to frequent this historical cafe include Voltaire, Jean-Jacques Rousseau, Victor Hugo

Procope is also recognised as the place where Denis Diderot and Jean le Rond d’Alembert co-founded and produced the encyclopaedia in the 18th century, and where Benjamin Franklin, who is known as a founding father of America and for writing the Declaration of Independence.

In 1903, Rumpelmayer founded with his son René, at 226 rue de Rivoli, a tea room “Angelina” in honor of his daughter-in-law. Its decor, designed by the famous Belle Epoque architect Edouard-Jean Niermans, combines elegance, charm and refinement.

As soon as it opened, Angelina became the essential gourmet and refined meeting place for the Parisian aristocracy. In its salons, Proust, Coco Chanel and the greatest French couturiers crossed paths. Today, Parisians, passing tourists and celebrities are jostling there to taste the famous Mont-Blanc and the unforgettable hot chocolate called “L’African”. Be carefull if you order hot choco, it’s very hot!

What can I say? Cheese heaven.

Come across this lovely bistro while searching for breakfast. Nice neighbourhood near St. Germain de Près.

What’s more Paris then Dior. I have this obsession for stationary, I wanted this cute notebook that I saw on their site. Went to their shop on Les Champs Elysée but they didn’t had the one I wanted so went to their other shop ( Maison Dior) where they sell interior things  at Avenue Montaigne. They offered to send a driver to get from one shop to the other. Even if it was 10 minute walk, we declined it. It was the funiest walke ever. As they are renovating the Dior shops, they’re all situated next to each other at Av. Montaigne. Thought the street was called like that because it goes down hill but apperently Montaigne was writer.

My favorite brunch was at Café Jade. Omelet with smoked salmon, coffee. Fresh juice, a croissant and baguette. Pretty interior. Stumbled across this place by accident. Would def revisit.